Frequent flooding and critically low crop yields are just two of the warning signs of climate change in Indonesia, home to the world’s third-largest tropical rainforest and some of the highest levels of biological diversity on the globe.

To shed light on these crucial issues, data journalists have launched the news site Ekuatorial, which offers the latest environmental news and engaging, easy-to-understand interactive maps of oceans, forests and natural disasters in Indonesia.

Ekuatorial worked with Indonesian Humanitarian OpenStreetMap, a volunteer group that assists in the collection of geographic data during and following humanitarian disasters. That group was also working with the local government disaster management organization BPBD. They quickly passed along local data to the Ekuatorial team, which used it to create a multi-layered map. 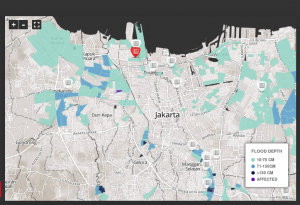 Ekuatorial is powered by JEO, an open source WordPress theme and geojournalism platform created by InfoAmazonia.

To create its maps, Ekuatorial first obtained data from a range of sources, such as governments, NGOs and community groups.

Then, they hired cartographers from a company called Axis Maps, which used geographic data platforms CartoDB and MapBox to design the maps. The cartographers published the maps directly onto JEO. Miguel Peixe, Infoamazonia senior developer, designed the JEO theme for Ekuatorial and led its implementation.

“This is a very advanced project with a large network of journalists and lots of data,” says Faleiros. “So that resulted in a lot of JEO innovation.” The Indonesian site was the first JEO-powered site to mix CartoDB and MapBox. As a result of the collaboration with Ekuatorial, JEO also improved its content filtering and launched an application programming interface (API). The API allows other publishers to use JEO’s database as the infrastructure for an app or a new interactive map.

Syndication is a key part of Ekuatorial’s strategy. Ekuatorial has more than a dozen partner publications whose news stories are shared on the site. Partners can share breaking environmental news and transmit local perspectives to international audiences. Users can also suggest published stories for Ekuatorial to feature on the site. The site does not publish press releases.

“One unique element of this project is its incorporation of small local media houses in the regions closest to environmental change,” Internews project manager William Shubert told. “Our hope is that a platform like Ekuatorial can help amplify the voices of local journalists to a global audience by using the site as a syndication service.”

The site’s Share a Map feature gives users custom embed codes that can be used to republish Ekuatorial’s maps on other websites. Ekuatorial updates its data frequently and allows users to download it for free.

“All the maps are layered with rich data, which also means there is a two-way dialogue in it,” Rondonuwu said: “Journalists can reveal stories from the ground or spot issues that emerge from the map.”

And that, she says, “generates a narrative that is more understandable for the public.”