In Kenya’s poor, dry Turkana region, recent discoveries of water and oil could change the lives of residents who depend on food aid for survival.

How much will the new resources help Kenyans, and how much of the new wealth will flow back to European investors? The answer is complex, but a team of data journalists is working to make it more clear.

Land Quest, a cross-border investigative journalism experiment is using data to illuminate the competing financial interests in Kenya. It maps the flow of aid money from Europe to Kenya, and the flow of profits from Kenya back to Europe. 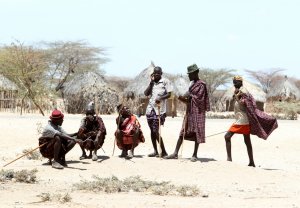 The site pulls European aid data to map the impact of land acquisition by international oil and water interests. It also shows the location and other information about development aid and private sector projects in Turkana and surrounding Lake Naivasha nearby. There, transnational companies cultivate much of Europe’s annual flower supply, while European-funded nonprofit organizations seek to protect water quality, defend labor rights and resettle internally displaced people.

The site is powered by mapping platform JEO, created by Brazil-based InfoAmazonia.

Land Quest is built to be easy for journalists to use. Developers created a “script that allows Google Doc spreadsheets to render directly onto map layers,” says Gustavo Faleiros, who founded InfoAmazonia and helped with the Land Quest project. “In practical terms, the points you see on the map are living on Google Spreadsheets,” Faleiros says, “and that means it’s easier for journalists to update the data.”

When site visitors hover over some points on the map, they can also explore investigations and multimedia features that give them a deeper understanding of what’s happening at that location.

The project is a cross-border investigative journalism experiment created by a group of Kenyan, European and American journalists. The investigation was financed by the European Journalism Centre and its Innovation in Development Reporting Grant Program. The platform was co-funded by the African Media Initiative’s Sandbox Fund, and spearheaded by Internews in Kenya in collaboration with Spain’s El Mundo and ((o))ecoLab. El Mundo’s website is publishing much of the content in Spanish. Kenyan media outlets will be able to access the Land Quest content in English and publish it on their own sites.

Eva Constantaras, an Internews Data Journalism Advisor based in Kenya and one of Land Quest’s creators, says the project hopes that in the near future, Kenyan journalists can post on Land Quest their own data-driven investigations of natural resources and land ownership in Kenya.

“We also hope to find funding to continue identifying and uploading new data sets to the map for journalists to analyze and visualize for their own stories,” Constantaras told IJNet. “Data access is a huge challenge for journalists in Kenya, and we seek to facilitate data access.”

Photo of men in Turkana courtesy of the DFID – UK Department for International Development, under a Creative Commons license.